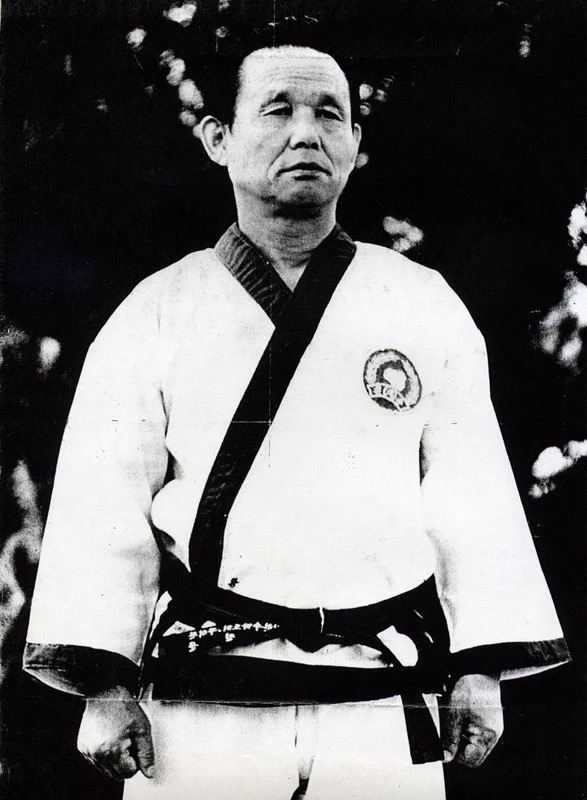 The name Moo Duk Kwan can be translated as the “School of Martial Virtue” or “Institute of Martial Virtue”. “Moo” means military, chivalry; “duk” stands for benevolence, virtue, goodness and “kwan” can be translated as large building or palace. The organization also has its distinctive logo on which the name Moo Duk Kwan is written in hanja, the Chinese characters.

Hwang Kee is considered to be the founder of Moo Duk Kwan. It all began around 1935. At that time, Korea was under the occupation of Japan and all non-Japanese martial arts were strictly forbidden. This is why Hwang Kee left for Manchuria in 1935 and started learning Chinese fighting techniques. There are also some rumors that he was trained at Lee Won Kuk’s Chung Do Kwan in Korea, but there are not many details about this period of his life. He did claim to have studied Okinawa Karate books which were left by the Japanese, which led him to incorporate some of Karate moves into his own martial arts system. His style became a combination of Chinese techniques and Japanese Karate. When he began teaching his art, he called it Hwa Soo Do, which meant “The Way of Flowering Hand” and he later adopted the name Tang Soo Do (or Karate Do, which was the Japanese name to his style).

Hwang Kee named his school Moo Duk Kwan, which translates to “School of Martial Virtue” and founded its first teaching center in Seoul, at the Yong San railroad station. First schools of this art usually opened in storage rooms of different railroad stations and they became called the Railroad Dojang. At this time, many people easily associated Moo Duk Kwan with railroad. Moo Duk Kwan Central Gymnasium opened in 1955 and soon after a number of other schools opened in different cities. And in 1960, the school changed its name to the Korea Soo Bahk Do Association in order to compete with the Taekwondo Association.

Hwang Kee was persistent not to let his school unite with the Korea Taekwondo Association. Although he was stubborn in his decision, this resulted dissociation of his regular students as many of them joined Taekwondo Association and left Hwang Kee. These practitioners included skilled Kim Young Take and Hong Chong Soo who left in 1965. However, the school managed to survive as the Korean government made a decision to unite all martial arts and control them centrally. Hwang Kee then managed to save his school in the court and The Moo Duk Kwan school survived. Although smaller than the Taekwondo Association, Moo Duk Kwan has continued its independent operation with headquarters in the United States. Numerous splinter groups exist in the U.S. and around the world, teaching practitioners Hwang Kee’s techniques.(1)

This martial art pays respect to Korean traditions in its many aspects. Some of these include the titles that practitioners, students and their teachers use. Some of these are same as the ranks in traditional society, while others are reserved for martial arts only. For example, Kwan Jang Nim is a title used to refer to the grandmaster, while master instructors have the title of Sa Bom Nim. Suffix “Nim” which is used in these ranks is also widely used to refer to people of various ranks in both traditional and modern Korean society.(2)

As any other developed martial arts system, Moo Duk Kwan also includes a comprehensive set of principles and creeds which help practitioners develop mentally and psychologically. Three main principles of the art include responsibility, sincerity and justice. And its 10 creeds are the following:

Moo Duk Kwan is considered to be a martial art which is not too constrained by the rules. Practitioners should, however, always abide by the moral principles and creeds of the art. These are, of course, some main rules which are shared with similar fighting techniques. The objective of the fight is to land as many kicks and blows as possible on the opponent in allowed target areas. It is fought on a special mat which usually takes up the area of 10 square meters. The victory can be achieved by a knockout, by scoring more points or if the opponent is disqualified. There are some forbidden moves as well, and these include, among others, grabbing, holding, pushing and turning one’s back to the opponent.

Korean martial arts are often featured in numerous movies and TV shows. Although Moo Duk Kwan does not share the popularity of Taekwondo, it does share many of its moves. Therefore, one can often see Moo Duk Kwan techniques practiced on the big screen. Popular movies that feature some of these moves include Once Upon A Time in high school, A Dirty Carnival, The Brotherhood of War and many others.