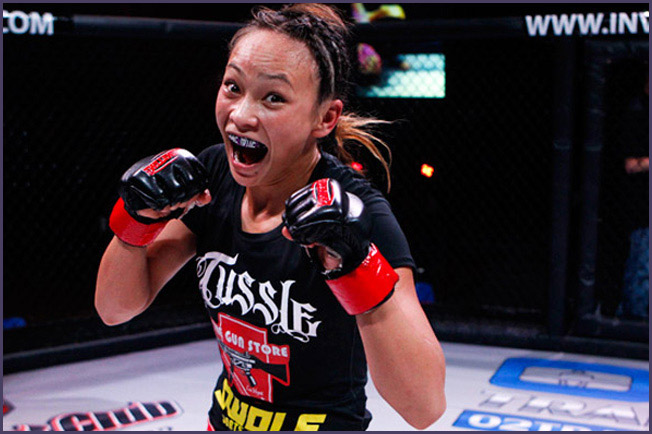 Invicta FC 8 Who's Who

After almost a year since the last Invicta show, every WMMA fan is chomping at the bit in anticipation for Saturday’s event, Invicta FC 8. It’s finally here! Invicta has dealt with a lot of difficult changes over the last nine months and is now re-emerging with a new breed of ladies taking centre stage. Recently it’s been apparent on social media that the promotion has been signing many athletes, many of whom are still yet to switch from amateur to professional. This is by no means a bad thing as it opens up the possibilities for many young hopefuls. However, only one of the fighters at Invicta 8 is making their professional debut.

Fan favourite Michelle Waterson, aka The Karate Hottie is currently 11-3-0, and the current Invicta Atomweight Champion. She hasn’t fought in 16 months so will no doubt be eager to get back in the cage and show why she’s the champion. Yasuko Tamada, aka Tama-chan is currently 15-8-3 and will be fighting for the first time outside of Japan, and for the first time against an opponent who’s not from her home nation. Similarly to Waterson, she hasn’t fought in 12 months.

Bound to be an exciting fight for the vacant Invicta Strawweight title that was previously held by Carla Esparza before being plucked by the UFC. Stephanie Eggink is currently 4-1-0 and follows a three fight win streak, the last of which was for her XFC Strawweight Title back in September last year. Katja Kankaanpää is currently 9-1-1 and comes off a victory back in May. If you take Stephanie’s amateur fights into consideration, both of these fighters are equally experienced, as they are well rounded.

Ediane Gomes, aka India, is currently 10-2-0. This lady has only had two of her fights go the distance. The majority of her wins have been via submissions, but her stand up is ferocious and she is often underestimated. It’s worth pointing out that her two loses have been to Ronda Rousey and Amanda Nunes. She goes into this fight on a four fight wins streak.  Tonya Evinger is undoubtably the more experienced of the two fighters, a veteran with a record of 13-5-0. Ten of her victories have been via stoppages, 6 of which have been KO/TKOs. She has fought some of the world’s best bantamweights and is a fun fighter to watch.

Both of these fighters are new to Invicta, Michelle Ould being someone that we’d expected to see fight for the promotion before now. He record stands at 7-3-0 (+2NC) and she continues a three fight win streak, the last of which was against Munah Holland at Bellator 74 two years ago. Her most impressive victory would be over Canadian Boxing star Jessica Rakoczy via second round TKO (Punches). DeAnna Bennett’s fight record is currently 4-0-0, and if you take her amateur record into account, she’s has never been beaten and is on an impressive six fight win streak. Only one of her professional fights has made it out of the first round, and that was against Julianna Pena. She last fought back in June so the possibility of ring rust in her case will be zero.

There is no other way to see this fight than the battle of the veterans. Roxanne Modafferi is a competent multi-discipline fighter with a record of 15-11-0. Her incredibly happy demeanour makes her a fan favourite, has been fighting in MMA since 2003. Tara LaRosa is one of history’s best female MMA fighters with a record of 21-4-0. She’s been fighting since 2002 and has fought a who’s who of female fighters. This is an exciting match up because of the similarities between them; both ladies are known for their grappling, both ladies are coming off of losses, and both ladies have beaten each other! This will be their third outing together in the cage.

Both of these ladies fight for the first time this year, and for the first time for Invicta. Peggy Morgan’s record is currently 2-1-0 and comes off of a loss to Jessamyn Duke at the TUF 18 Finale last November. We expect Peggy to be a tougher version of her previous self, and eager to prove herself. Irene Aldana’s record is 3-1-0 and she also comes off of a loss. Her last fight was back in December against Larissa Moreira Pacheco for the Jungle Fight title. All three of her wins have been by way of KO.

A fight that has been bubbling over and in the making for quite some time. Both ladies have made disrespectful and antagonistic remarks about each other over twitter, this is a grudge match be sure of that, and one of the fights that we’re most excited about. Before we talk about stats, it’s worth pointing out that this fight is also a milestone for Invicta as it’s the first bout in the promotions new Lightweight division. This opening of a division will hopefully also have a knock on effect to other promotions, and in turn open the doors for many more athletes that struggle to find fights at this weight and above.  So let’s compare these two ladies records. Veronica Rothenhausler, aka The Heartbreaker stands 5’11” tall and is currently 1-0, but don’t let that fool you, she is one of the most exciting prospects for WMMA. Taking her amateur career into account she’s had four fights total, has won all of them and has done so with a total of 3 minutes and 22 seconds cage time. Her last three fights have been via KO and two of which were in the first 5 seconds of the fight. She has never seen past the 2 minutes mark of the first round. Charmaine Tweet won’t be daunted by that fact, as she is no stranger to standup. She was previously a Muay Thai world champion before transitioning to MMA. Her current record stands at 5-4-0 and therefor is the much more experienced fighter of the two. She comes off of a victory back in May, whereas Veronica hasn’t fought since January 2013.

Ashley Cummins will be no stranger to Invicta followers as she has fought on three of their previous shows. Her record stands at 3-2-0 (amateur 8-0-0). She comes off of a two fight losing streak so will be eager to get back on track and therefor bringing a tough fight for her opponent. Alexa Grasso’s record currently stands at 4-0-0 and although her fight record is clean, she has a lot less experience than Ashley. Her last fight was against Karina Rodriguez who she beat to win the Xtreme Kombat Flyweight tournament.

Jodie Esquibel will be bringing more experience into the cage that Jinh Yu. Her record currently stands at 3-1-0, however she has had 14 professional boxing fights. She is coming off of a loss to Alex Chambers back in April 2013. Jinh Yu Frey’s record is currently 2-0-0, and she has become well known for her brutal head kick KO over Darla Harris last year. Of the two fighters Jinh Yu is the slightly better rounded fighter, but Jodie’s experience could out way that.

Both ladies make their Invicta debut and some would say… about time! JJ Aldrich actually also makes her professional debut after an amateur record of 7-4-0. Four of her victories have been via submission, and 1 via TKO. As well as the usual MMA training, she also hold a 3rd Dan black belt in Taekwondo. Delaney Owen is currently 2-0-0 and is actually on an impressive 5 fight win streak. Having had 10 fights total, she has only been stopped once, and that was via a decision. We’re really excited to see both of these ladies coming into the Invicta cage.

Now all we have to do is wait until Saturday! Invicta FC 8 will be Live on UFC Fight Pass