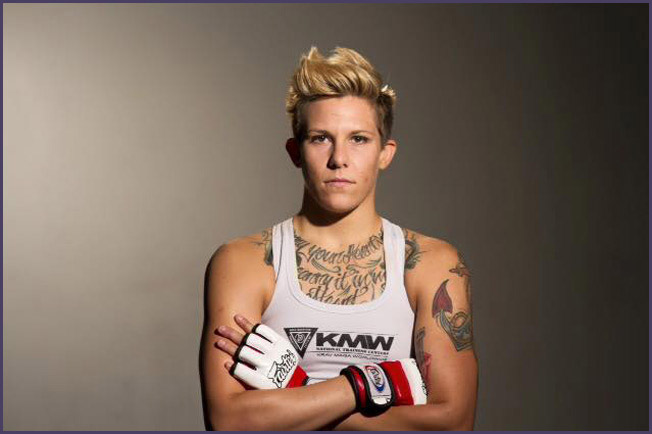 Here is our Macy Chiasson interview, your voted winner of the ‘Amateur Fighter of the Year’. Macy, aka ‘The Chainsaw’ is a young Amateur champion fighting out of Louisiana, USA. Her current amateur record is 5-1-0, and she’s on a four fight winning streak. We decided to ask Macy some questions and find out some more about her!

Awakening: Hi Macy, thanks so much for joining us!

Macy: Hey everyone! Thanks for having me.

Awakening: Congratulations on winning the ‘Amateur Fighter of the Year’ in the 2015 Awakening WMMA Awards. How does it feel to be recognized in this way by the fighting community so early in your career?

Macy: Thank you so much! I am in complete awe over winning this award.  It is truly amazing to be recognized by Awakening WMMA Awards and the entire MMA community. I am so thankful for everyone’s support.

Awakening: Who was the first person you told when you found out?

Macy: The very first person I told was my girlfriend Kelly. She was sitting next to me when I received the email from Awakening WMMA. We were so excited!

Awakening: 2015 was an incredibly successful year for you, with you winning all four of your fights with finishes, and finally claiming the RMMA Amateur Championship title in October! What was it like for you to defeat Annie DeCrescente, a fighter with a lot more cage time than you and to come away the champion?

Macy: 2015 was quite an adventure for me. During my fight camps my coaches and I worked on a lot of wrestling and grappling. When I found out I was fighting Annie DeCrescente I was eager to put what I learned to the test. She is such an amazing and well-rounded fighter. She has also fought so many more times than I have.  I’m a striker and she is a wrestler. Fighting her really tested my abilities on the ground. Defeating her and winning the championship title by rear naked choke was such an unbelievable moment. I had worked so hard that fight camp and to win by submission was incredible.

Awakening: You sound so wise already! Can you tell us how you first became involved in martial arts and competing in MMA? How old were you, and where did your journey start?

Macy: Like most, I played a lot of sports in high school so saying I’m competitive is an understatement. At the time, I was 19, just started college, and was looking for something to do outside of school. I noticed a gym about 2 miles from my house that had this giant sign saying KRAV MAGA, fighting, self defense, and fitness. So, I checked it out, took one class and LOVED IT! As you know, Krav Maga is not a martial art. It’s an aggressive Israeli self defense system designed to extremely injure or even destroy a violent attacker. Competing in Krav Maga is not possible since groin kicks, eye gouging and head butting IS LEGAL.  Since competing is out of the question I did the next best thing. I became an instructor and now teach others how to defend themselves. I made my way up the belt system and am currently an ‘Expert level’ instructor at Triumph Krav Maga. I really wanted to get into the competitive side of fighting and MMA just called out to me. I joined a Brazillian Jiu-Jitsu gym and started my journey into the world of MMA fighting. The Transition into MMA wasn’t hard, as for Krav Maga has taught me how to be the fighter I am today. 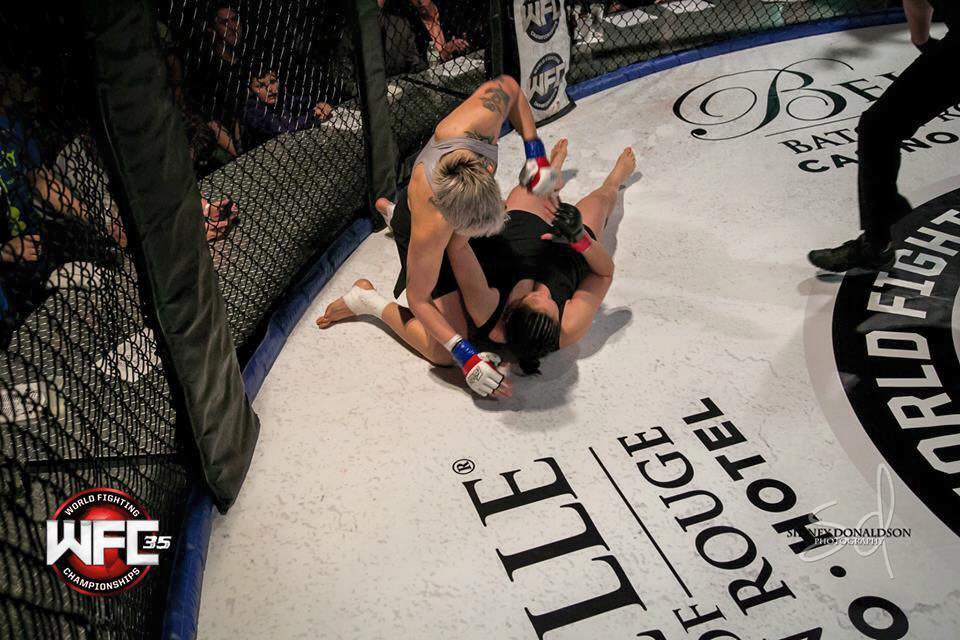 Awakening: What a great answer, we’re going to put that on your Awakening profile!  So what makes you tick, who inspires you? Have there been any other fighters that you particularly admired?

Macy: I’ve always been a huge fan of Holly Holm, especially her fighting style. I watched her long before she fought Ronda Rousey.  I’ve always been in awe over her movement and footwork.  Her fight against Allanna Jones is my favorite fight. She baited her with a jab and knocked her out with a left round kick to the head. It was beautiful.

Awakening: Good choices!  We understand you have reached an instructor-level ability in Krav Maga, as an on looker - a terrifyingly brutal system. What aspects of this Krav Maga have you found to transcend so well into your MMA career?

Macy: Krav Maga has one rule, finish the fight. Because Krav Maga is so aggressive, it easily transcended into MMA.

Awakening: As a Lightweight (155 lbs / 70 kg) fighter, what has been your experience with finding fights in this weight class, and how do you hope to see the opportunities for Lightweight women develop in future?

Macy: It’s been very tough finding opponents. Although more and more women are starting to enter the MMA world, finding people to fight has been difficult.  Amateur fighters are not held to the same standards as pro fighters. There are no consequences for backing out of a fight a few weeks or even the week of weight inns. I’ve been two weeks out from a fight, in the middle of cutting weight, and have had my opponent drop out.  I hope to see the female side of MMA continue to grow.  I also hope to see more serious amateur fighters.

Awakening: We hope so too. Going forward, what are your goals as a fighter and a martial artist?

Macy: My goal is to continue to grow as a fighter and a person. I hope to go pro sometime this year. 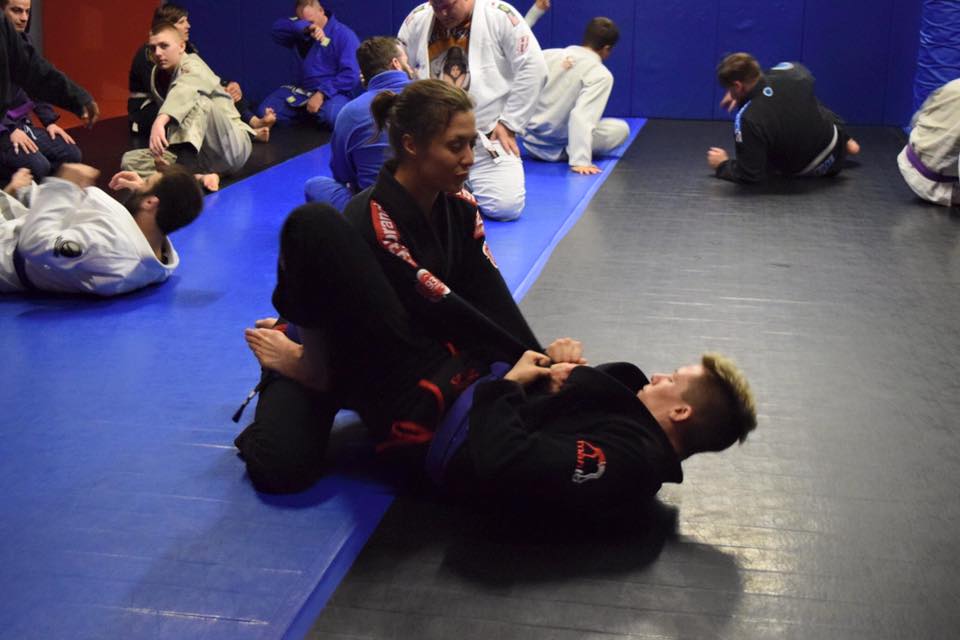 Awakening: That’s great news, how exciting!  For other women interested in martial arts and who may begin training or competing, what advice would you give to them?

Macy: If you want to be something bad enough, then you absolutely can and will achieve it.  Train with as many gyms as you can, become your own fighter and not someone else’s. I’ve learned that it’s great to branch out and try new things. Don’t be a one sided fighter.  If you are open to continuously learning and growing you won’t be disappointed.

Awakening: Moving into 2016, when can everyone hope to see you compete next, and you mentioned turning pro within the year, can you be more specific?

Macy: This year is a going to be an exciting year for me! I’ve decided to drop down to the 145lbs weight class.  I’m fighting February 19th in New Orleans. I will be competing in a jiu-jitsu tournament in March.  I also have quite a few fights lined up within the next 6 months. But my ultimate goal is to become pro by the end of this year!

Awakening: Thanks for taking the time out Macy, we wish you all the best and look forward to continuing to follow your career!

Are there any shout outs or Thank-Yous you’d like to make to close out the interview?

Macy: I’d like to first and foremost thank Awakening MMA for supporting me.

Big shout out to TRIUMPH KRAV MAGA and my leading MMA gym MID CITY MARTIAL ARTS. I'd like to thank my coaches: Shawn Gayton, David short, Thanh Le, Carlos Vera, and coach Brent for all of the time and effort you put into my training. Couldn't have asked for a better team. Love you guys!

I would also like to thank Myron Gaudet and Collin Murray at MUSHIN MMA TRAINING CENTER for all of your help and support throughout my career. 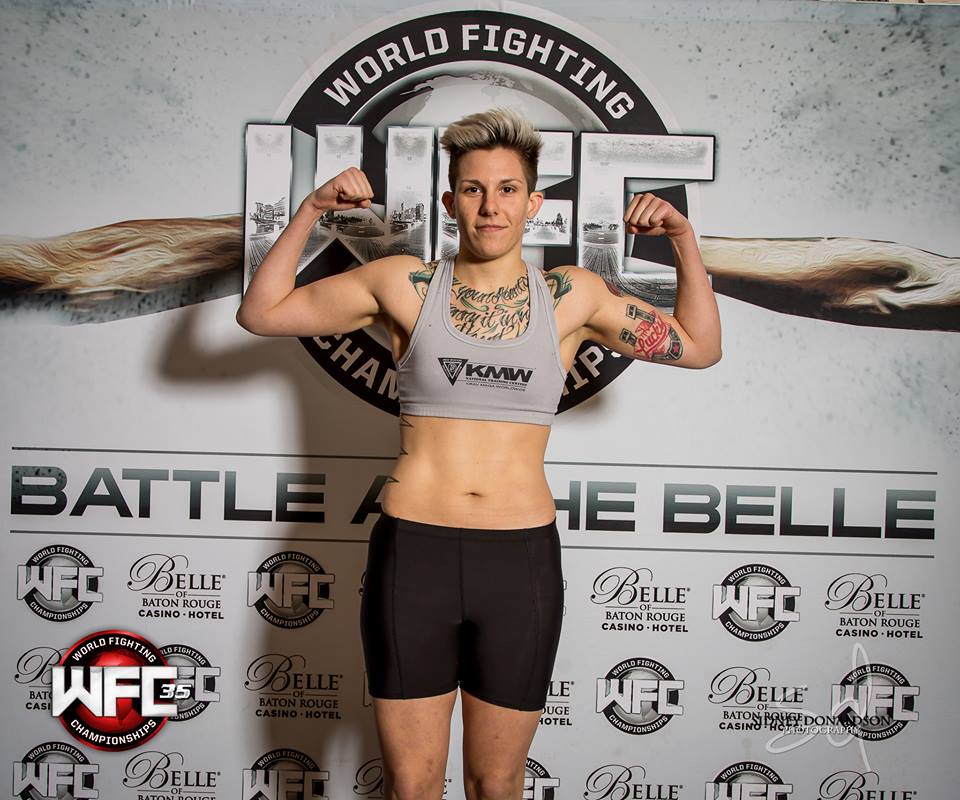 We're extremely proud to say that "Macy Chiasson Interview, Amateur Fighter of the Year 2015" is the very first time that Macy has ever done an interview! We've asked her not to forget us when she reaches the top!

(263)
£9.33 - £11.99 (as of n/a - More infoProduct prices and availability are accurate as of the date/time indicated and are subject to change. Any price and availability information displayed on [relevant Amazon Site(s), as applicable] at the time of purchase will apply to the purchase of this product.)

(22)
£4.00 - £6.99 (as of n/a - More infoProduct prices and availability are accurate as of the date/time indicated and are subject to change. Any price and availability information displayed on [relevant Amazon Site(s), as applicable] at the time of purchase will apply to the purchase of this product.)

(82)
£5.99 - £19.78 (as of n/a - More infoProduct prices and availability are accurate as of the date/time indicated and are subject to change. Any price and availability information displayed on [relevant Amazon Site(s), as applicable] at the time of purchase will apply to the purchase of this product.)

(1072)
£8.14 (as of n/a - More infoProduct prices and availability are accurate as of the date/time indicated and are subject to change. Any price and availability information displayed on [relevant Amazon Site(s), as applicable] at the time of purchase will apply to the purchase of this product.)

(883)
£15.99 - £16.99 (as of n/a - More infoProduct prices and availability are accurate as of the date/time indicated and are subject to change. Any price and availability information displayed on [relevant Amazon Site(s), as applicable] at the time of purchase will apply to the purchase of this product.)

(2820)
£18.95 - £24.95 (as of n/a - More infoProduct prices and availability are accurate as of the date/time indicated and are subject to change. Any price and availability information displayed on [relevant Amazon Site(s), as applicable] at the time of purchase will apply to the purchase of this product.)