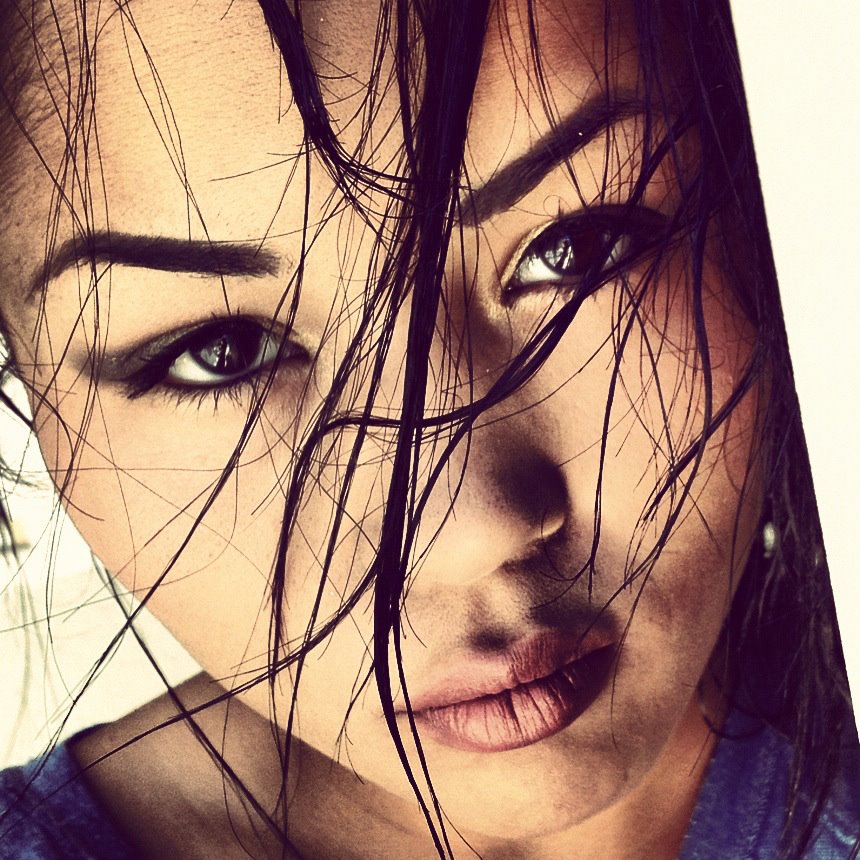 If you missed it, click here for An interview with Kaliesha West (Part 1)

We want to delve a little deeper now and find more out about you. What was it like growing up as Kaliesha West?

“I don’t mind talking about anything that has happened in my past, I don’t mind talking about anything... tragic, or happiness because that’s exactly what moulded me into the person that I am today. You know, when I was young I was called “Oreo”, I was called “fake black girl”, and I was even jumped by a couple of girls in the apartments where I lived. I was always a very nice girl, this is when I was in grade school, I didn’t necessarily turn to boxing because of this…” 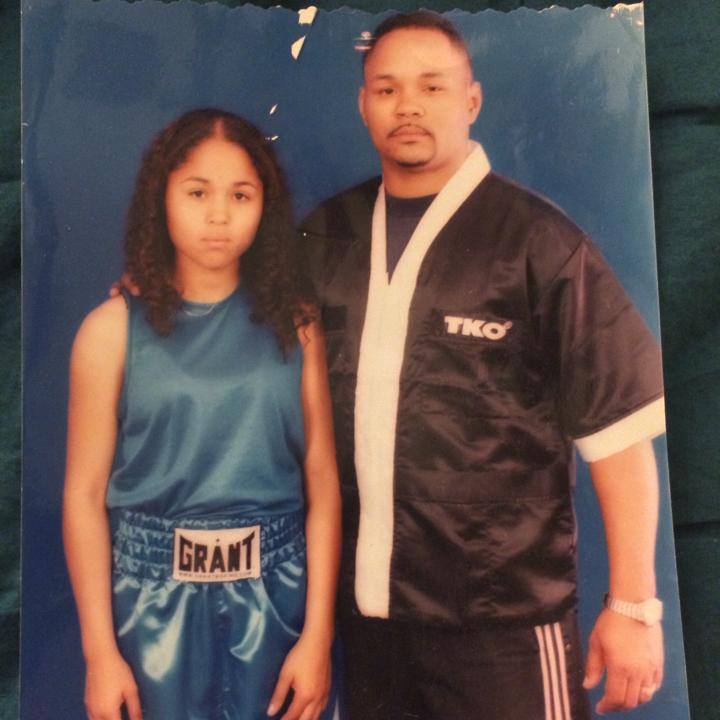 “…boxing was just introduced to me by my dad, but I found that boxing did give me confidence that I never used to have when I was picked on. When I say “picked on” I mean I was called “big forehead”, I had “crooked teeth”, you know “bugs bunny”, all these different names. I was very shy and I didn’t talk much, now… I have the biggest mouth you could probably run into in the sport (chuckles).. but it made me who I am today, being picked on made me a very humble person, not only that but I see people from within, I do believe that your outer layer is just a shell and sometimes shells are nothing more than just a… I want to say… a shield, and you know a shield can only protect you for so long, until your real inner personality is displayed. I’m glad that that happened to me in my past, and I encourage anyone that goes through something similar to pick up a sport whether it be boxing, soccer, baseball, anything because sports are like an outlet, and they give you this inner healing when you win or when you over achieve, or when you accomplish something in your sport, it’s the greatest feeling and it gives you confidence to where nothing else matters, no-one else’s opinion matters but your own, and your own judgement, and those that are around you and who are important to you.”

Thank you for sharing that Kaliesha! When did you first realize that you wanted to become a boxer, how did that come about?

“You know I first realized when my dad was hired as a boxing trainer in Mareno Valley, and he was training a whole group of fighters, and I used to listen to their stories and I wanted to do all of that… and some. I used to want to tag along, my dad was my role model, and he was my hero. When he became a coach I wanted him to train me, I wanted to be a part of everything, I wanted him to teach me and I was 9 years old when I sparked interest and about 10 and a half when I started.” 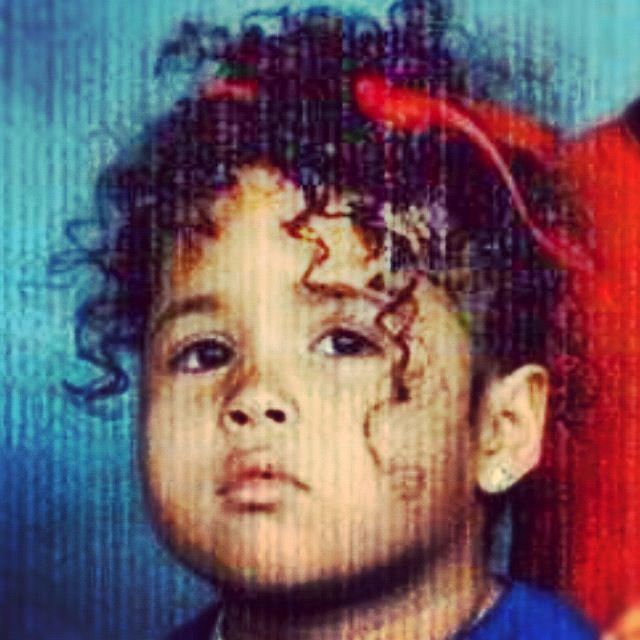 “Daddy when I grow up, I want to be a champion boxer and fight on TV like De La Hoya did!” – Kaliesha West aged 9

“After watching one of Oscar's fights early in his career, I remember saying this to my dad. I wanted to fight on TV SO bad while my entire family cheered me on. I thought boxing was exactly how I saw it on TV. I remember when I finally went to the gym, I was so disappointed when I learned I had to wear a headgear lol. Then as I grew older, I learned ...there was no WAY I could box on TV, because I as a woman ;( Ahhh... The naive mindset of a young girl.”

In the name of transparency, the above quote was taken directly from Kaliesha’s facebook (which we urge you to “Like”, the link is at the bottom of the page).

…and during your early boxing career, and perhaps even now, who are there any other female fighters that you looked up to?

“Of course there are, you know… when I was first starting out my dad took me to one of Laila Ali’s fights and I remember watching the girl that she fought, and the girl that she fought wasn’t very good at all. But it was a quick fight and it ended really quickly and remember Laila was really upset because the girl wasn’t much competition. But I remember just whoever my dad would tell me about because he knew all about women’s boxing. When I took an interested he followed it, he studied it…” 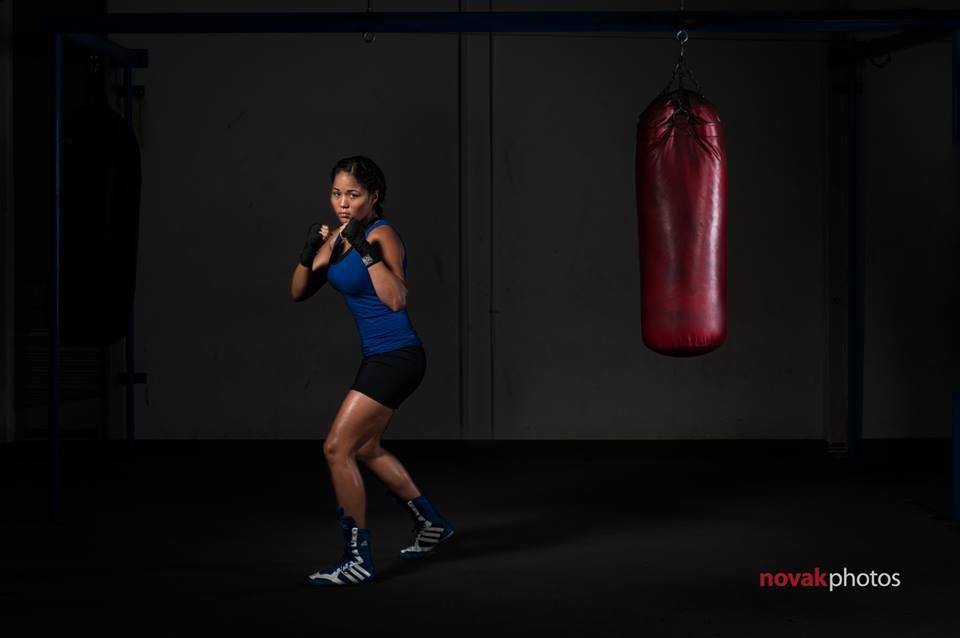 “…and he would mention names here and there and I remember seeing Melissa Hernández fight at Pechanga and I had just turned pro, and I remember thinking she’s got such an amazing character and her boxing moves were brilliant, so she was a fighter that I really looked up to when I was young… Ada Velez was another one of them, when I was at the USA Nationals, I got to meet her and get her autograph with Belinda [Laracuente], and I remember Ada just being real humble, cool and real kind, and it’s funny because I actually ended up fighting her later and it was just really weird to me, and I was honoured at the same time – in there fighting my heart out trying to win, so it was a really great experience. Of course Lucia Rijker is the only female boxer that I became drawn to… and I would follow her videos, I bought her dvd of shadow boxing, and write her on facebook all the time... and she’s the only female boxer actually that I think is just amazing like if I think of a Mike Tyson, she’s awesome. Her and Ann Wolfe I have so much respect for.”

We urge our readers to go and Like your facebook page, a lot of the things you post are very insightful and are often amusing. We mentioned this because a few months ago you made a comment regarding Ronda Rousey which made us chuckle…

"If her coach wants to brag, and disrespect one of my favorite legendary female boxers, have his diamond miss Rowsey lace em up, and we can do a one on one full fledge boxing match. MMA always wants a boxer to cross over, but when will an MMA fighter cross over to boxing. I'm just saying…"

Firstly, well said! …and secondly, what would your prediction be for that fight? 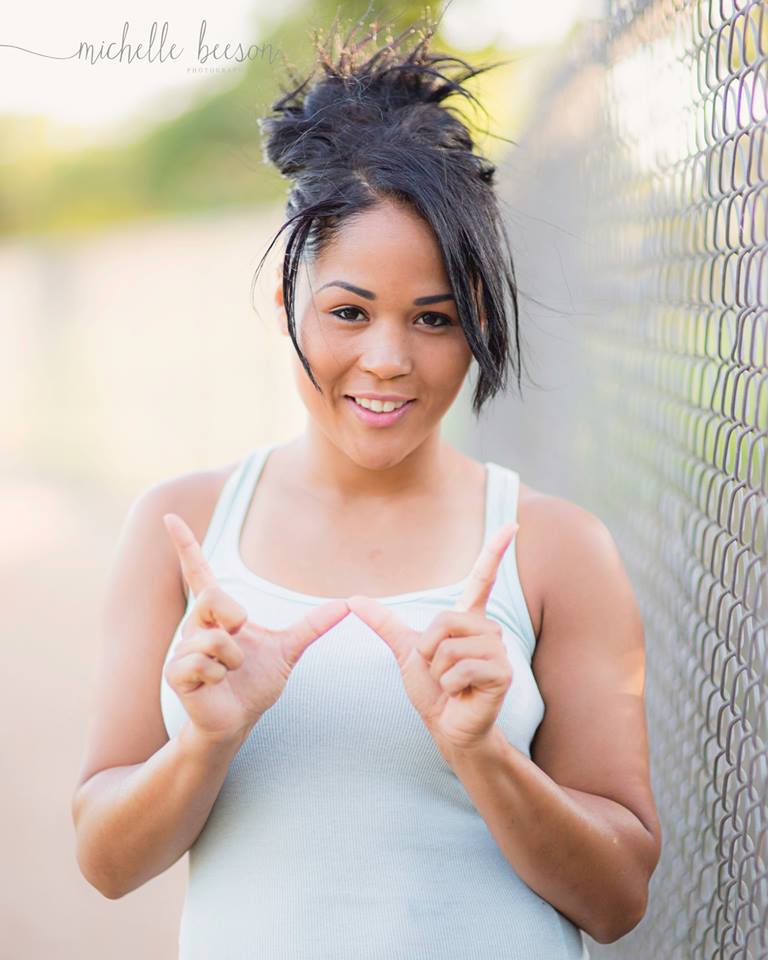 “Well obviously if it was a boxing match everything changes, I think Ronda Rousey doesn’t stand a chance against any world champion female boxer if it was just stand up. I respect her as a judo master, I respect her as even jiu-jitsu and in the cage, I think she’s awesome but in this time you’ve got to respect others for their craft as well, and if you’ve got a young lady… um such as myself, for example, who has spent 16 years of dedicating their life into learning an art such as boxing, you’ve just sometimes got to respect them and not try to think you can defeat them, it’s not rocket science, it’s a given you’re not going to win in a boxing match.”

We know it will never happen, but we would like to see that fight! The last question now, where do you want to be in 5 years' time?

“Well you know what, I’m already 26, in 5 years I’ll be 31, I know my heart will want me to keep boxing but I’ve got to think of my long term career... I do find myself happy when I’m empowering others and when I’m encouraging others to achieve things, so as long it’s somewhere down the road running my mouth for the good. After boxing then I can see myself somewhere in the business but more on the business side. Boxing is what made me, boxing is what made me who I am today and there’s no way I wouldn’t see myself living the rest of my life not being involved at all. I will always have some sort of latch on this sport, no matter what critiques or what sexism still goes on, I’m not going anywhere.” 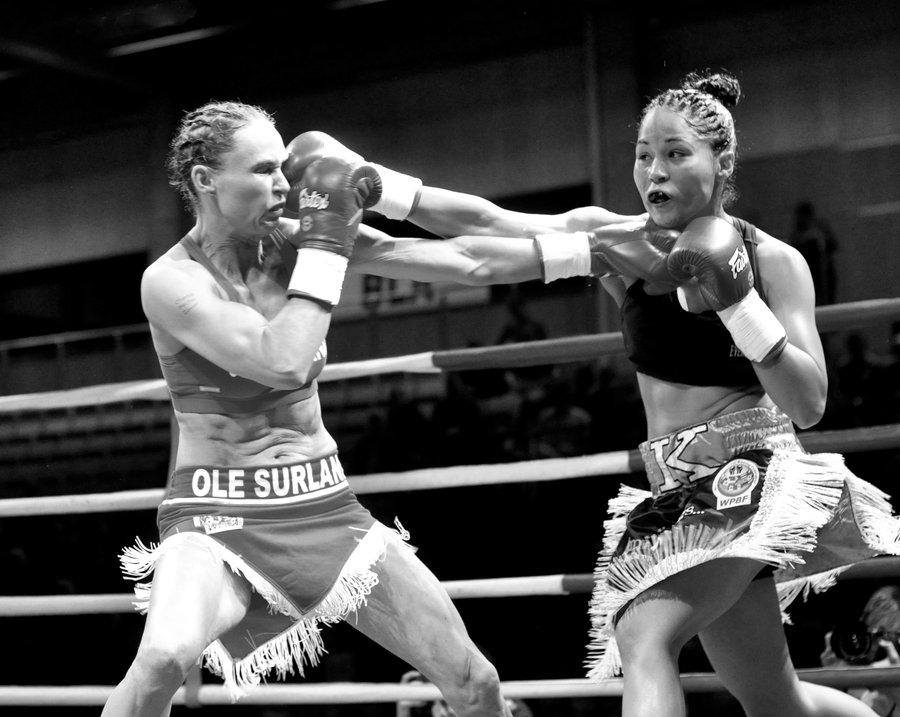 We really appreciate you spending time talking to us, more than you know. We wish you all the best for Nordic Coliseum Women Boxing 1, and we'll be waiting with baited breath to see you back in the ring! Are there any thank yous or shout outs you would like to do?

“I do want to give a shout to my sponsors for this fight, Nutrition Zone out here in Mareno Valley, I have a lot of support in my town. I want to say thank you to Beauty Scars Apparel, Glen Keesic Arts and Designs, a graphic artist… my team, Corey, my dad, my family and friends, my fans... and they all know who they are. It’s just an overall great training camp, my sparring out in Meadowbrook Boxing, their amazing out there, they take care of me... and everybody else who’s been there since the beginning, and I want to give a shout out to the promoter for doing this… and I’m looking forward to going to Canada, I’ve heard great things about Canada… I’ve heard that there’s nothing but sweet people there (smiles), so I look forward to actually going and meeting everybody and hopefully giving them what they came to see. Thank you for taking the time to interview me as well, I’m sorry if I sound tired too… I am tired! (chuckles)” 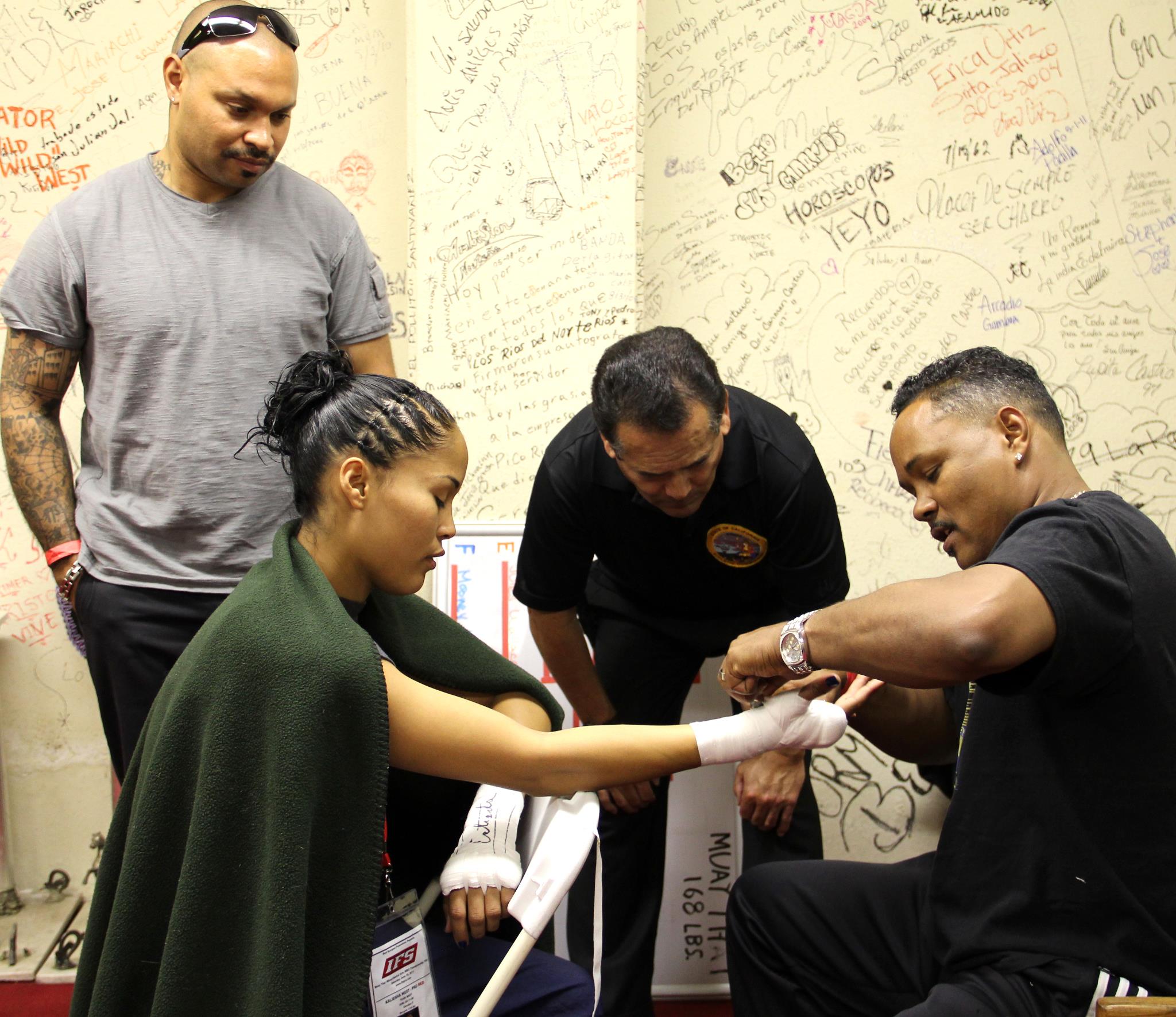