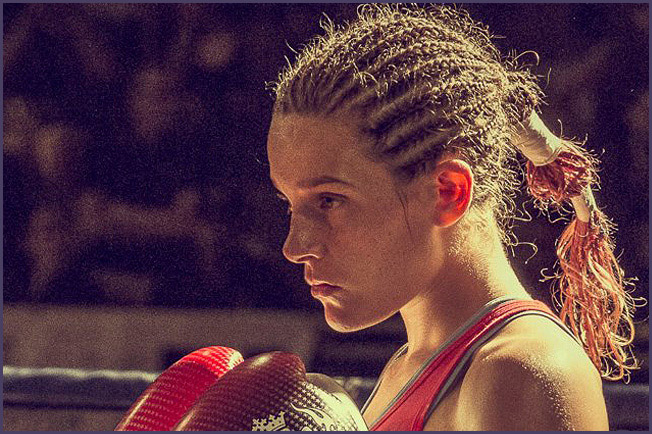 Victoria Lomax is a 23 year old Muay Thai and K1 fighter from England, who actually fights out of Spain. She faces Lucy Payne on March 23rd at Judgement Day 2 and aims to take the Awakening World Title from her. We decided to chat to her and throw some questions her way in the run up to the fight.

Hi Victoria, thanks for taking the time to chat to us! How are you?

First things first, when Lucy's coach (Nathan Kitchen) sent out a request for fighters to challenge her for the belt, there wasn’t any responses at all. This is when you stepped up! We give you huge props for that. Can you talk us through how your camp came to this decision?

“Well, since I first started fighting I’ve always had in mind a handfuls of girls that I’ve always thought “Wow I'd love to fight that girl, that would be awesome if I could get myself to that level”, and I told Ilde my trainer about Lucy and how I'd always watched her fights, and how she's one of Julie Kitchen's fighters, whom I always looked up to before even starting to fight, so she was always like wow if I get to fight Lucy like wow haha!!! And when I saw that I was like omg!! Want that fight! So I asked my coach and he's like yeah let's go for it, hell I have nothing to lose, and everything to win!”

What a great attitude! What do you know about Lucy, and how does this affect how you're training for the fight?

“I know she's like the tallest 57kg fighter out there, which I love fighting taller people, I really do!! And I know she knows how to use that to her advantage.”

Beyond the physical training, how does a fighter prepare mentally for a stage such as this? Would it be fair to say that this fight is your toughest challenge so far?

“Honestly, I'm taking it as any other fight!! It’s definitely the toughest challenge I’ve had so far but I’m not looking at it like that as I have no pressure, because I haven't got the weight on my shoulders of being someone well known, I don't have anyone coming to England with me apart from my corner, so I don't have any pressure.”

A fighter with no pressure is a dangerous fighter! The majority of people might consider you as the underdog, does this help you in anyway, or perhaps have any negative effects on your mental approach?

“Hahahahahaha!! I love being the underdog!! I love it! I think since my first pro fight every fight I have taken I have been the underdog, I have lost some and won some! But if I'm the underdog it means I'm stepping up to yet another level! And I thrive on that I really do, it pushes me more in training and puts me in a really good mind-set for a fight like this one!!” 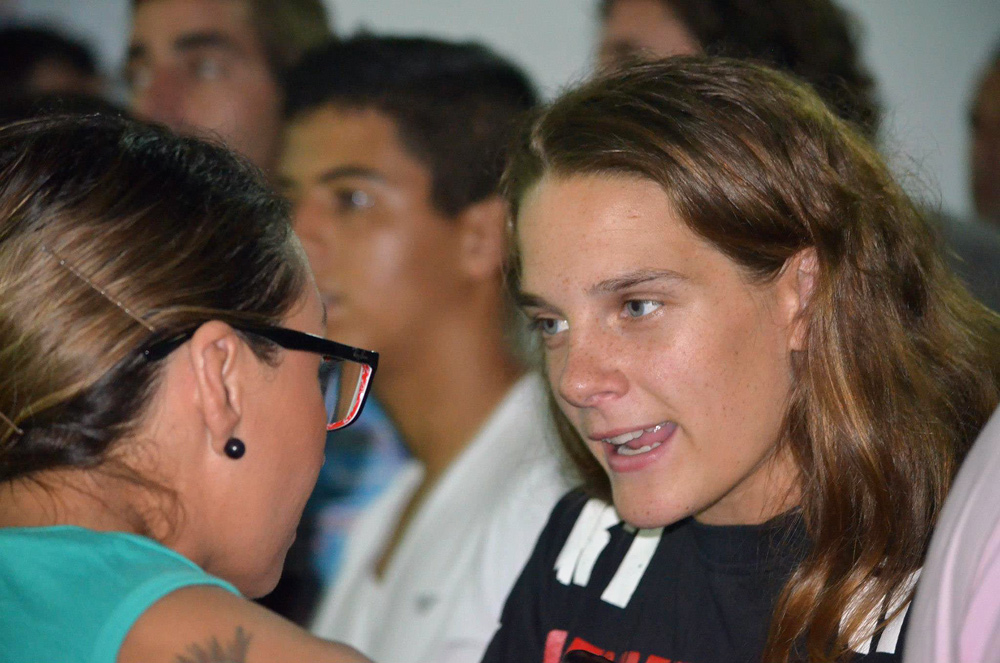 You're fighting out of Spain, and usually it would go without saying that taking a fight abroad would have additional difficulties due to the "home advantage". Does being born in Manchester, UK make you feel comfortable here and therefor make the "home advantage" that Lucy has irrelevant?

“Well, I know Lucy has the home advantage, but that doesn't bother me, I mean, she's gonna have a lot of people there I'm sure from her teammates to her friends to family, but that to me means more added pressure I mean she's the champ she's gonna have to keep her title she's got someone wanting to come take it, so that to me is added pressure plus having your family friends there, I'm glad I've not got the "home advantage".”

So let's find out a little more about you. How does a girl from Manchester end up fighting out of Fuengirola, Spain? How long have you lived there?

Your nickname is 'La Guiri', what does this translate as into English? And how did you get it?

“La Guiri, translates to The Foreigner haha, but I got it from the gym I train at, I walked through the door 2 years ago, from a different gym which was English run and I had like 6 fights or something, so I walked into the Spanish gym and in my terrible Spanish asked if I could train there just for the summer whilst my gym was shut and 2 years later I never left and now speak fluent, so they call me "la guiri" because of that.”

The Foreigner, that’s too funny – and very unique and cool too! 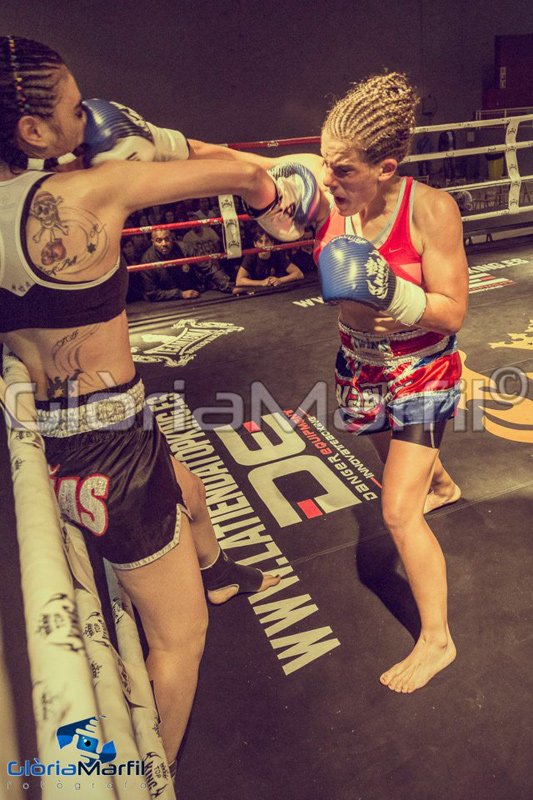 Tell us how and when you first started martial arts. How old were you? What first made you start? And did you practice anything before Muay Thai?

“I first did full contact when I was about 13 and I loved it, but then gave it up because I was going with my big brother and he stopped so I didn't want to go alone, then I took it back up at 19 I think, because I needed to lose weight, I was like 93kg :/ sounds terrible haha, but I was 93kg and needed to lose the weight so that's why I took it up.”

Have you been inspired by any other female fighters?

“I've always looked up to Julie kitchen!! Haha!! How ironic!! But yeah Julie Kitchen!! And then last year I was at Enfusion in Barcelona where my team mate was fighting and saw Iman Barlow for the first time ever and was like blown away!! So she's a real inspiration to me to!”

For the benefit of our global audience, can you tell us anything about the Spanish female fighting scene? Who are people talking about over there? Is it a thriving scene, or is it still relatively early days for the sport in Spain?

“I mean in Spain, the girls fights, they're getting there!! I took part in a show in Barcelona last year which was just girls, that was cool, it was called Queen of Queens that was like a female tournament and then female superfights, but apart from that we’re lucky if there's one female fight on the show.”

“Right now people are talking about Iman Ghbalou, because she's going to be fighting Iman Barlow, and she was in the female Muay Thai angels, I mean there really isn't many girls over here fighting.”

Well even more props go to you for being in a small minority in that case, female fighting needs to be big in every country! 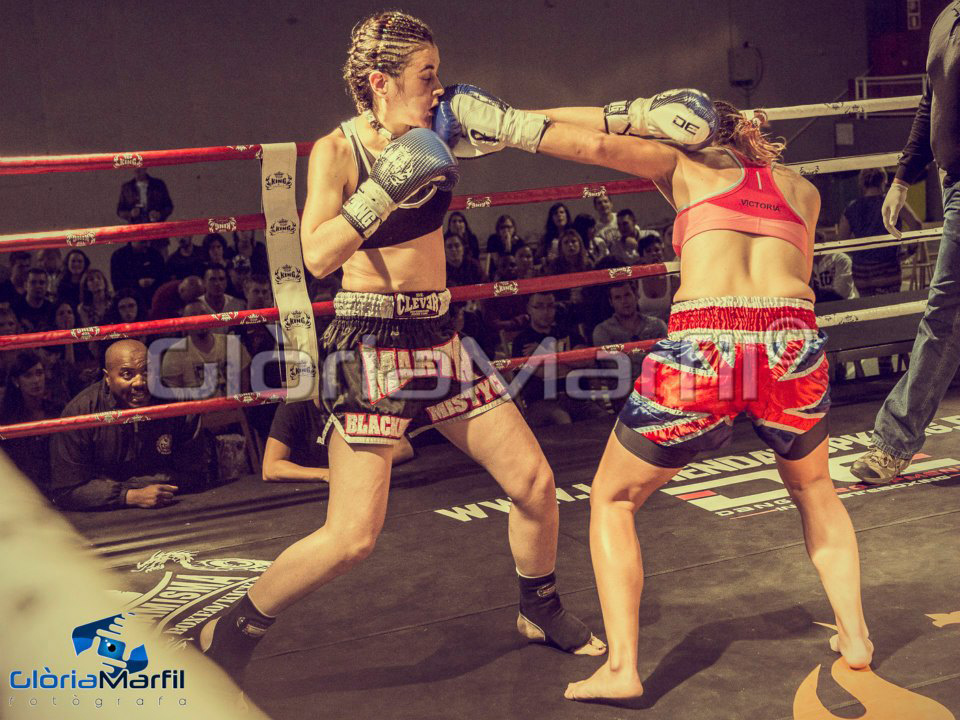 Some people will be wondering this, so we must ask. What are your thoughts on MMA, and do you have any plans in the future towards the sport?

“I was actually asked about doing a fight in MMA before the Lucy Payne fight came up haha!! I mean I dunno, I like the idea of it, but then I'm like cauliflower ears hmm!! Hahaha”

That was an amusing answer we didn’t see coming. Thank you so much for joining us Victoria, we look forward to seeing you at the March 23rd show and we wish you the best of luck! We simply can’t wait! Before we close out, are there any thank you's or shout outs you would like to do?

“Yeah, I'd like to thank you guys for what you guys are doing for the female fighting industry, hopefully after this fight it can open it up to Spain more, and get the people in Spain more out there!!”

“Id like to thank my family and friends for putting up with me for the last few months!!! Also my family at my gym Team Spartans!!! And most importantly my trainer, Ilde Garcia!!! For all the help and time you've given up for the training of this fight!!”

“I’ma have to translate this now for him!! Hahaha”

(182)
£6.70 - £22.88 (as of n/a - More infoProduct prices and availability are accurate as of the date/time indicated and are subject to change. Any price and availability information displayed on [relevant Amazon Site(s), as applicable] at the time of purchase will apply to the purchase of this product.)

(17)
£9.90 (as of n/a - More infoProduct prices and availability are accurate as of the date/time indicated and are subject to change. Any price and availability information displayed on [relevant Amazon Site(s), as applicable] at the time of purchase will apply to the purchase of this product.)

(20)
£40.15 - £53.99 (as of n/a - More infoProduct prices and availability are accurate as of the date/time indicated and are subject to change. Any price and availability information displayed on [relevant Amazon Site(s), as applicable] at the time of purchase will apply to the purchase of this product.)

(2049)
£16.97 (as of n/a - More infoProduct prices and availability are accurate as of the date/time indicated and are subject to change. Any price and availability information displayed on [relevant Amazon Site(s), as applicable] at the time of purchase will apply to the purchase of this product.)

(1981)
£29.00 (as of n/a - More infoProduct prices and availability are accurate as of the date/time indicated and are subject to change. Any price and availability information displayed on [relevant Amazon Site(s), as applicable] at the time of purchase will apply to the purchase of this product.)

(70)
£9.99 - £10.99 (as of n/a - More infoProduct prices and availability are accurate as of the date/time indicated and are subject to change. Any price and availability information displayed on [relevant Amazon Site(s), as applicable] at the time of purchase will apply to the purchase of this product.)