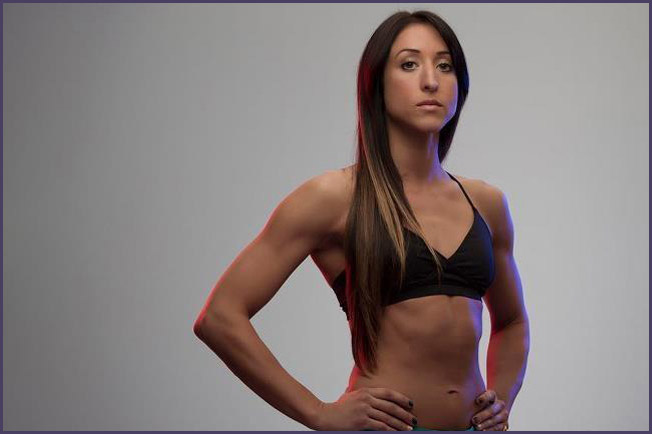 The cast of TUF 20 has been revealed! For the first time, the entire cast of The Ultimate Fighter will be women, with 16 strawweights competing for the inaugural UFC Championship belt! Eleven fighters from Invicta Fighting Championships were signed to the UFC back in December, and eight of those women will be competing. Unfortunately, three athletes will not be on the show, as Paige VanZant is underage, Juliana Lima is not fluent in English, and Claudinha Gadelha withdrew due to the frequent weight cuts. However, Joanne Calderwood, Tecia Torres, Rose Namajunas, Alex Chambers, Emily Kagan, Felice Herrig, Bec Rawlings (formerly Hyatt) and Invicta FC Champion Carla Esparza make up the first half of the TUF 20 cast.

Joining them are the other talented cast members who tried out April 28th in Las Vegas, who were announced as part of International Fight Week at a UFC press conference earlier today. Here are your final 8 TUF 20 athletes!

Jessica Penne
Competing since 2006, Jessica was a favourite to earn a spot in the house. The inaugural Invicta FC Atomweight Champion, who is ranked #2 in the world at 105 lbs, was also the first woman to compete under the Bellator banner. With an 11-2 record, Jessica has showcased her Brazilian Jiu-Jitsu Brown Belt talent by submitting 7 of her opponents! She can also boast a win in shootboxing over Japanese powerhouse Rena Kubota, and finishes over fellow cast members Lisa Ellis and Angela Magana. 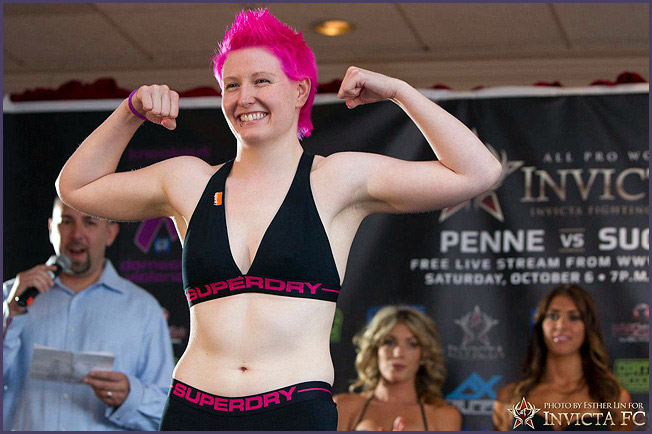 Another favourite, ‘Ais the Bash’ holds a 14-5 record. Despite the popularity of SBG teammate Conor McGregor, it is the quieter Aisling who is actually the first person from Ireland to gain a world title, when she defeated now UFC bantamweight fighter Jessica Eye for a Flyweight Championship in 2011. A Brown Belt in Brazilian Jiu-Jitsu, Aisling has won 7 of her fights by submission, but is also well-rounded with 5 TKOs to her name! At just 26 years of age, she comes in with the second highest amount of pro fights and pro wins to her name, after veteran Lisa Ellis. 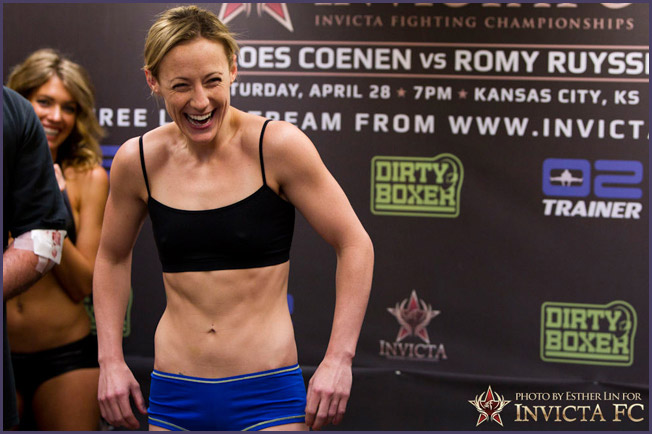 Lisa Ellis
A pioneer of WMMA, Lisa Ellis (formerly Ward) has been competing since 2004. Holding a 15-8 pro record as well as a 3-1 amateur record, Lisa brings a wealth of experience, having twice each fought the likes of Jessica Aguilar, Miku Matsumoto and the legendary Megumi Fujii. An impressive grappler, 11 of her 15 pro wins and all 3 of her amateur wins have come by submission, and she is the 2007 World Grappling Champion! Her one win that was pushed the distance was a decision victory over fellow cast member Aisling Daly. She is very familiar with TUF, as her husband Eddy competed on the 16th season of the show. 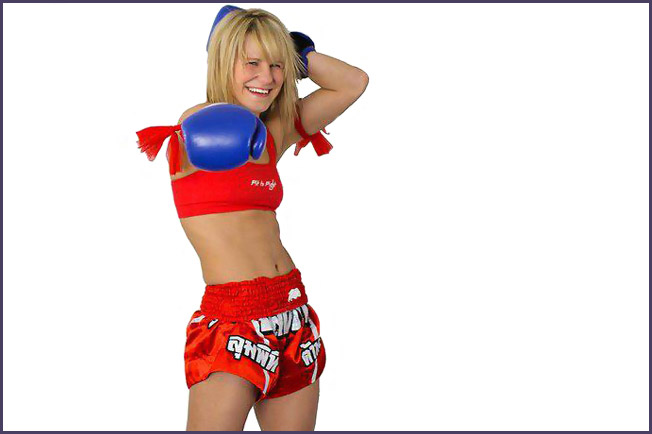 Justine Kish
A very strong striker, Justine is a World Muay Thai Champion, winning the WMC 59kg belt in 2012 and holding a 14-1 record in the sport. The Kempo Karate Black belt also has a win under kickboxing rules. Further accomplishments include a Golden Gloves State Championship, and a boxing record of 2-0-0 on the pro circuit. Her skill has translated well into MMA where she is undefeated at 4-0. While her stand-up is certainly undeniable, her grappling is underrated with two of her four MMA wins coming by submission. 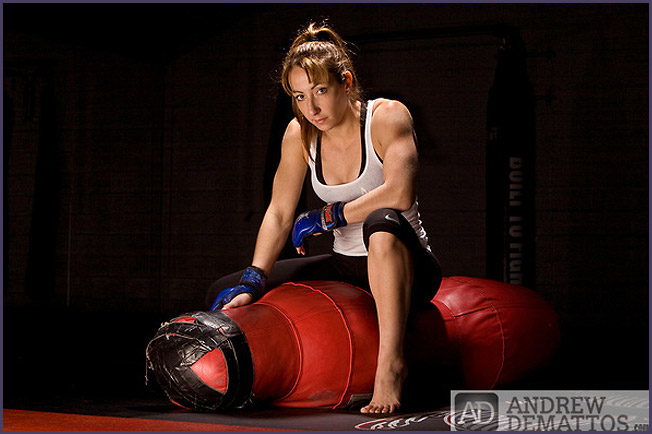 Heather Jo Clark
Heather is an exciting finisher, with only one win going the distance. Holding an MMA record of 6-4, she has 3 submission victories, a TKO and a highlight worthy 10 second KO! Her stand-up can also be seen in her pro boxing career where she is 1-0-1. It will be interesting to see if she faces fellow cast member Felice Herrig, who she previously lost to by split decision but has continued to clash with over social media. Heather managed to persevere to the last bell in that fight despite a broken arm! 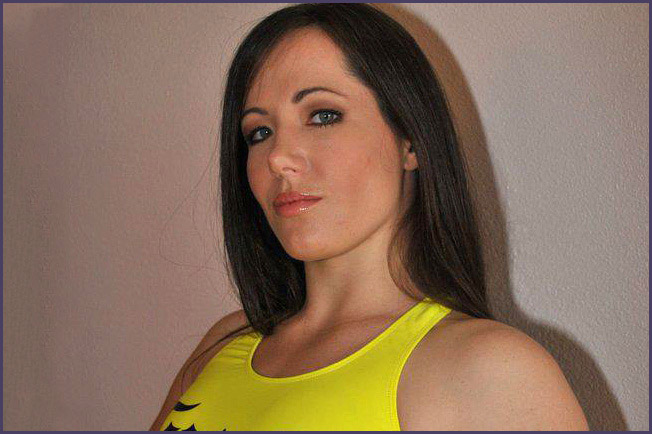 Angela Magana
Angela was a high school wrestler who made the transition to MMA, and is one of the more experienced ladies in the house with an 11-6 pro record. Of those wins, 7 have been first round finishes! Notable decisions include victories over Invicta FC Flyweight Champion Barb Honchak and highly ranked Jessica Aguilar. She began boxing training at 14, which has served her well as she’s never lost by knockout. A mother, Angela will be away from her daughter Delilah during filming. 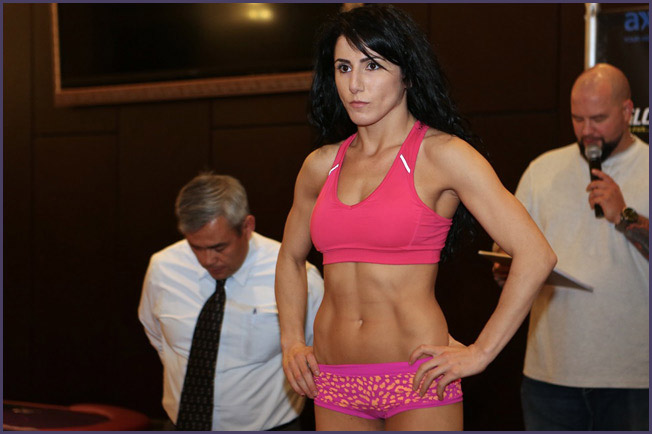 Photo Credit: Resurrection Fighting Alliance
With a pro MMA record of 4-1 and and amateur record of 3-1, Randa can possibly be classed as another armbar enthusiast, 3 of her 4 pro wins have ended with this submission and also one of her ammy wins. Randa has had two fights this year, already winning a strawweight championship. Interestingly, her first fight of 2014 was her only loss on her pro record – and this was to fellow cast member Justine Kish! 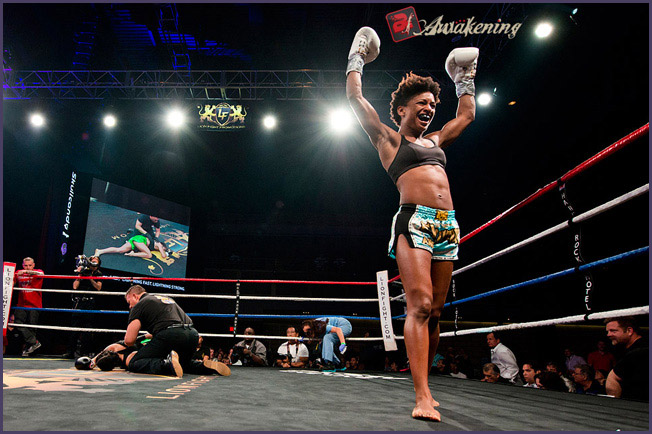 Angela Hill
Angela “Overkill” Hill fights out of Brooklyn, New York and is one exciting fighter! She is perhaps a surprise pick to some, as she has only a single pro MMA fight, which she won just days before trying out for TUF. Behind that MMA record though is a wealth of successful experience in Muay Thai. If you add her pro and amateur records together in that discipline, she is undefeated at 16-0 and is a North American Champion. We were ringside at Lion Fight 10 and were very impressed with her speed and power.

Two alternates were also chosen, but have not yet been announced. Lightweight Champion Anthony Pettis and contender Gilbert Melendez will be coaching the two teams. Melendez in particular is a strong supporter of WMMA, as his wife Keri Anne Taylor is a Muay Thai fighter.

Filming begins Monday, and the season premiere will air on Wednesday September 10th. Athletes will be under social media blackout during filming.